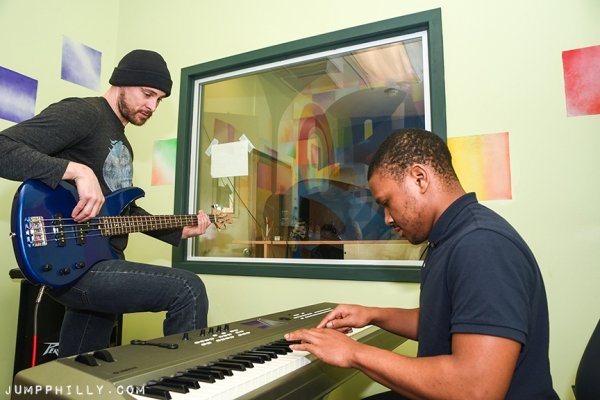 The young boys at the Evening Reporting Center are writing their own soundtrack in the juvenile justice system.

“At ERC we be learning/ getting some jobs in return,” rings out through the speakers in the sound booth in the recording studio, which sets up Lee’s verse. “Here they teach us about real life/ not ‘x to the two’/ they should come to my school/ teach a lesson or two.”

Just hours ago, Lee was released from house arrest. At 4 p.m., he promptly arrived at the Northeast Treatment Center at Second and Norris streets – this time, on his own accord.

For the past six months, Lee has been one of the adjudicated delinquent youths under the community-based supervision of the Evening Reporting Center. He’s been working with his peers to put together a theme song for the ERC and voluntarily came to the music program today to use the third-floor recording studio.

The kids at ERC are all given a second chance. Instead of being sent away to a juvenile detention center, they are placed under supervision in their communities.

After school lets out, youths arrive to the court-mandated, alternative placement program. They are supervised between peak crime hours, 4-8 p.m., then return home – their GPS ankle monitors make sure of it.

Here, they learn to cook meals for one another, to plan finances and to develop social connections through music, art and sports. The creative alternative to juvenile detention “works to view the whole child,” says Adam Serlin, ERC program director and former musician.

“It’s not always what the child did. It’s what has been done to the child,” Serlin says. At the ERC, he says they first ask, “What are the ways we can address the deeper causes for behavior?”

In other words, the program pays special attention to rehabilitation instead of punishment. 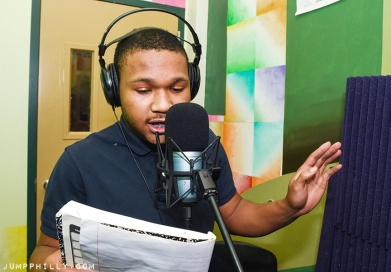 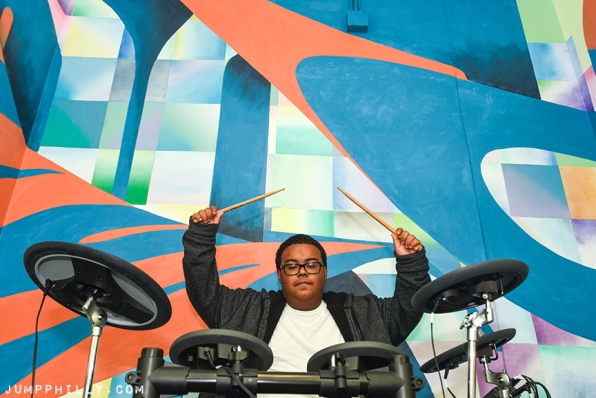 Through the juvenile justice system, the ERC works with the Department of Human Services and Philadelphia Family Courts to provide community supervision during the length of house arrest. To provide music programming as a form of creative expression, the ERC is partnered with the nonprofit Limelight Arts.

“We give them interests they can connect to so moving forward, they’ll have some new passions that can prevent issues or recidivation in the future,” Serlin says.

Co-founders Frank Machos and Avery Coffee provide ongoing opportunities for the at-risk youths to build tangible skills in music. Machos utilizes his role as the director of music education for the Philadelphia School District to help secure equipment for the ERC and place kids who complete the program into school music programs after the end of their sentence.

His partner, Coffee, visits the program every Wednesday to provide hands-on music instruction. For Coffee, watching kids engage with unfamiliar instruments as an act of creative expression is what makes this program special.

“They get to have a voice,” Coffee says. “In this system, you’re getting talked down to constantly. You’re constantly surrounded by adults who don’t understand your situation. They aren’t looking you in the eye. They’re writing stuff down and you’re getting passed down the line. In here, you get to say what’s on your mind. This is your outlet. You’re not just a number.”

It was Serlin’s goal to create pro-social programs that would allow his kids to feel heard and find a productive way to let off steam.

“Our kids are not different than any other kid,” Serlin says. “A lot of times they just have fewer programs to go to and fewer things to do. That typically leads to trouble.”

Serlin identified music as a transferrable skill that can be carried anywhere and used as a coping mechanism if the child has issues at home.

“Music helps me express myself because I can get stuff off my chest,” Lee says. “If I’m having an issue with something, I can rap it and it will relieve it a little bit.”

According to the DHS, in 2014, 82 percent of youths placed in Philadelphia ERCs were successful in exiting the juvenile justice system.

Fajr, a 17-year-old alumnus from West Philadelphia, was one of them. The skills he learned in the music program landed him internships with Jr. Music Executives and PhillyCAM before being hired to measure data by the ERC.

“If you’re interested, everything is in your reach,” Fajr says as he sits behind a keyboard in the live music room, mindlessly pressing keys as he speaks. “They’re not asking you to do anything except play music. I was blind to everything when I came in here. They presented me with ideas that worked in my own head.”

The ultimate goal of the Evening Reporting Center is to provide at-risk youths with skills for rehabilitation. They aren’t looking to make a star of every kid that walks in the studio. Instead, they are focused on the healing power of music and the potential of a second chance.

“Even if it’s just making the process a little more palatable throughout, making their journey through the juvenile justice system something that is a little less terrifying, that’s a success,” Serlin says.