The bleachers at the MLK Recreation Center at 21st and Cecil B. Moore Avenue were packed as community members came out to see the 3rd annual Fall Classic All Star Game. The exhibition game, celebrating the start of Juvenile Justice Week, featured youth from the Philadelphia Providers’ League playing against an all-star team of juvenile probation officers.

Inside the rec center, volunteers collected candy for a safe, neighborhood Halloween event (see sidebar on Page 2) and tables were set up to provide youth and community members with information about different services and programs. Among those represented were the Defender Association of Philadelphia, the Police Athletic League, the Philadelphia Technician Training Institute and Northeast Treatment Centers. 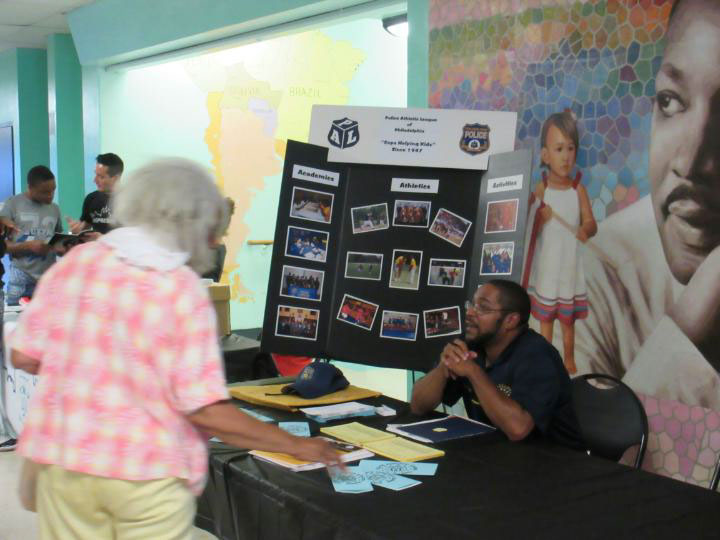 Leonard Thompson, who used to play basketball in the MLK Recreation Center, was now there on behalf of Philadelphia Technician Training Institute. Thompson applauded the informal nature of the event. “I think it’s fantastic,” Thompson said. “It builds connections. It builds relationships.”

Children from the community had a shoot-around and socialized before making way for the all-star teams to take the court for pregame warm-ups. The feeling in the room was optimistic, if not a bit competitive.

“They’re already starting to talk some trash,” Adam Serlin said with a smile.

Serlin is the Director of Court Services with Northeast Treatment Centers, one of the organizers of the event. Of the many organizations involved, many are helping kids in the juvenile justice system stay in the community and at home instead of placement facilities. 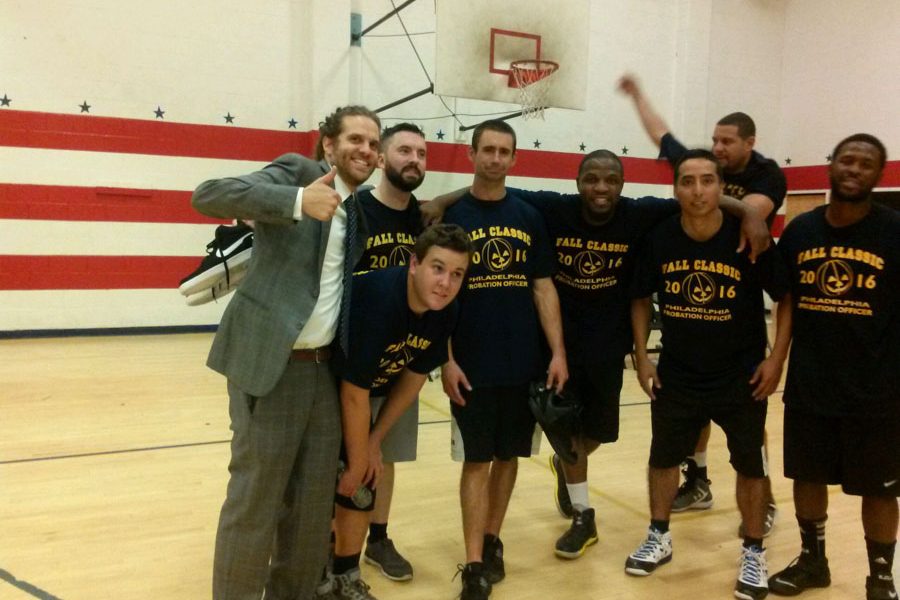 Before long, the ball was tipped and the youth tried to take advantage of age being on their side with a mixture of full court press defense and a wide-open fast-break offense. By halftime, they had built a 14 point lead.

Halftime allowed community members to mingle with judges and other city officials and a dance routine was performed by the North Philly Bearcats.

An unexpected highlight came during the second half when the Special Ops Drumline, who practices at MLK, took the court for an impromptu and rousing performance. The thunderous drums echoed through the gym as numerous spectators pulled out their phones to record the moment. 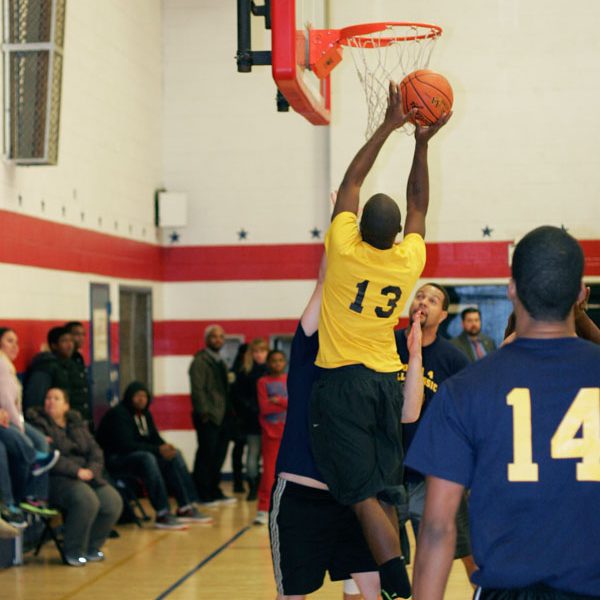 The lead elapsed in the second half as the game went back and forth down the stretch. With 12.5 seconds left in the game, the probation officers inbounded the ball, down by a score of 52-49. One of the officers got off a decent look as the seconds ticked away, but the shot didn’t drop as the youths took a 2-1 lead in the all-star series.

Both teams lined up to shake hands and share laughs as the annual trophy was brought to half court.

According to officials, Showing the probation officers in a different light was one of the many reasons to organize the game. “This informal interaction hopefully reveals to our young people that we are all humans like them,” said Angel Flores, Deputy District Attorney for the Juvenile Division. “And that we are all working together to try to better their situations.

A drive to show citizens that agencies were there to help them and their families was a consistent theme of the  night. “We want people to call us and engage us,” said Jose Loya, Communication and Development Manager with the Defender Association of Philadelphia.

The association was on hand with informational pamphlets and representatives educating attendees on how they can help, something Loya says is much easier when they lose the shirt and tie and get out into communities. “We’re also recognizing that there are barriers to services, and I think one of the great things NET is doing is trying to tear down some of those barriers,” Loya said.

The collaboration between the juvenile court system, public defender’s office and the many other organizations at work that night are a sign to Adam Serlin that the city is moving in the right direction. “Everyone’s kind of working together,”Serlin said later. “I do think in Philadelphia we have a pretty progressive juvenile justice movement.” 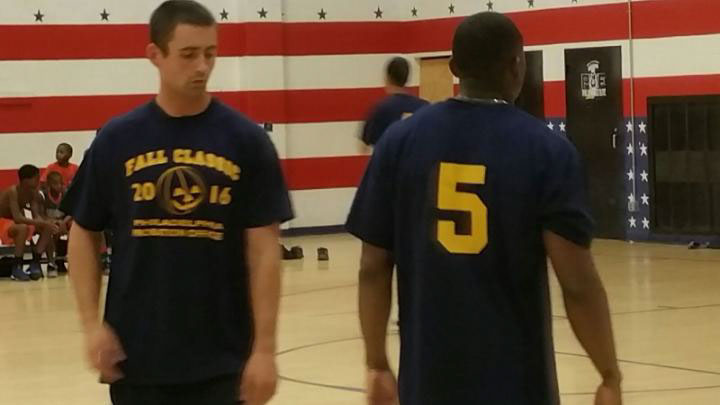 Serlin cited research that showed that sending juveniles to placement facilities is often not best for adolescents. It may not be best for the city either as the average cost of placement nationwide is approximately $88,000 per child, per year.

A number of kids participating in the Fall Classic All Star game are currently enrolled in a program that gives kids in the juvenile system a chance to stay in their communities. Northeast Treatment Center’s Evening Reporting Center is a six month program that allows kids to report daily from 4 to 8PM as an alternative to placement facilities. The center includes cognitive behavioral therapy, financial literacy classes, and career training among other programs. There is even a recording studio on the premises.

Serlin said that the program gives a second chance for mostly non violent offenders, many who are in trouble due to technicalities or probation violations. “We already know that teenagers are impulsive,” Serlin said. “But that doesn’t mean that they’re bad kids or bad people.” 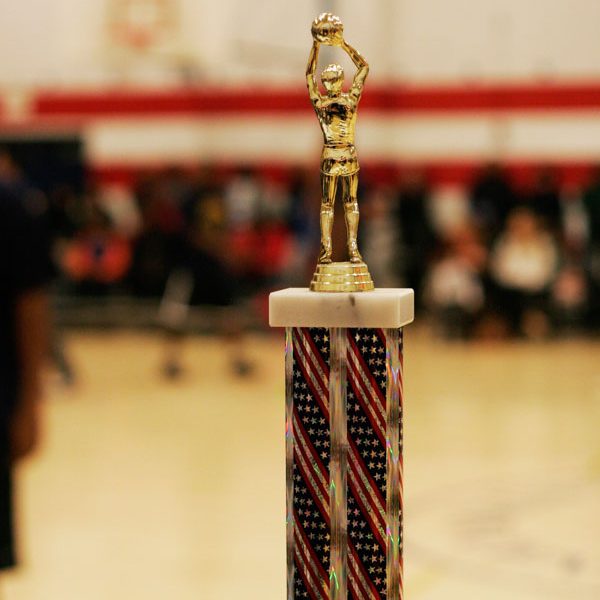 The Evening Reporting Center and Fall Classic All Star game are just two of the many reasons Serlin is excited to about the state of the city’s outlook. “It’s an exciting time to work in juvenile justice system here.”