The holidays tend to bring out the best in all of us, and that is especially true of our partners and insureds at Northeast Treatment Centers. NET is already an incredible organization, with over 800 compassionate and professional staff members providing a continuum of trauma informed behavioral health and social services to 10,000 consumers annually. These services include: mental health, addiction treatment, foster care, residential group care, adoption, juvenile justice services and child welfare services. These activities increase exponentially over the holidays, specifically through the efforts of their annual toy drive and “adopt a family program”. In order to help with these efforts, NSM Insurance Group is proud to present NET with a $10,000 donation to be used across all programs.

The toy drive collection serves families within the NET Community Care (child welfare) program in addition to children and youth receiving behavioral health services and children whose parents are receiving addiction treatment. In 2018 NET raised over $12,000 as well as received hundreds of toys to be distributed to 300+ families and 650+ kids. The adopt a family program also made a significant impact, with 20+ families adopted through NET’s donor network and 50+ families adopted specifically by the Volunteers of America’s holiday program. 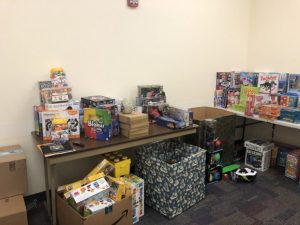 “We are so proud to work with such an incredible organization in NET and its even more amazing to experience firsthand the impact they can make in the community through efforts like the toy drive and adopt a family program”
Sean Conaboy, Insurance Advisor, NSM Insurance Brokers

“We are extremely appreciative of NSM’s generous donation! Our holiday programs would not be possible without the support and commitment of our generous partners and donors. The families that NET serves face many complex issues and for many of them poverty is just one of their struggles. Our hope is that by providing toys and gifts during the holidays we are able to alleviate some of stress and bring a little joy and happiness to families and their children”
Karla Eyre, Grants Manager, NET

If you would like to contribute to these amazing programs, don’t worry, there’s still time! The easiest way is to order the toys directly through Amazon, where NET has set up a Shopping List to make orders and deliveries convenient and fast. Simply go smile.amazon.com and search for “NET” under Charity Lists. If you do not have an AmazonSmile account, then you will be asked to create one before you can search the “Charity Lists”. If you have already purchased new and unused toys, they can also be dropped off at NET: 499 N. 5th St., Suite A, Philadelphia, 19123

By the time Ruby Morales-Negron was 16, she had lived with four different foster families.

She was so determined to find a permanent home that she was willing to leave Philadelphia. She got to know Carly King – an adoption supervisor – on road trips to mixers for eligible adoptive parents and foster kids.

They went to bowling alleys in Millersville, roller rinks in Lancaster. King would urge Ruby to stay optimistic as she left each awkward activity without a meaningful connection. The two talked on the car rides back to Philadelphia about what Ruby wanted for her future and the sting of being an older kid continuously passed over for younger children.

“It’s something that has always pulled on my heartstrings,” King said. “They are such sweet and loving individuals yet I would chronically see foster parents opt to adopt younger kids, watching foster kids age out, entering the world on their own, without support and it would eat me up.”

On Nov 9, two weeks before Ruby’s 18th birthday, King adopted her. The two celebrated Friday in a room filled with colorful balloons and the happy shrieks of young children. Ruby was the oldest of the 20 kids honored on National Adoption Day, put on by the Department of Human Services.

Ruby was one of 1,100 youth awaiting adoptions in Philadelphia. Thirteen percent are over the age of 13. When young adults turn 18, they age out of the system or, in some cases, choose to receive DHS assistance until they turn 21. Many struggle to stay on their feet and become homeless.

“Coming into my teen years, I knew I actually wanted a family I wanted to be in a household with someone I could call mom,” Ruby said. “Carly was always my back-up person. She was always there for me.”

Ruby entered the system at age 9 after her mother died and family members couldn’t – or didn’t – step up.

She was placed into foster care where family after family said they were happy to provide a short-term home but didn’t want to adopt.

In 2014, Ruby was placed in a pre-adoptive home. Things went well at first but then the mother got a new boyfriend and her attitude toward Ruby shifted.

“I felt very uncomfortable,” Ruby said. “She didn’t believe what I was telling her; she didn’t talk to me as much as you should talk to your child.”

On top of that, Ruby felt unwanted attention from the boyfriend. Worried it could escalate, she called Carly, whose number she had kept from those car rides.

King, who works at Northeast Treatement Centers, one of the city’s privately contracted social service agencies, got the call in the middle of a training session on how truama affects a child’s self esteem.

“She was in crisis mode,” King said.

Single and 28, King did not anticipate becoming a foster mother but she also knew first-hand the struggles that young adults without a family face.

About four years earlier, King had received a similar call. Alexis Hearst, a young woman who she knew from a summer camp in Philadelphia, had lost her financial aid at college and was now homeless in Georgia.

The young woman’s family had stopped answering her pleas for help.

King mailed her a plane ticket back to Philadelphia and took her in.

Now all three women; Alexis 22, King, 29, and Ruby, live in a three-bedroom home in Northeast Philadelphia. The girls call her “sister mom.”

They have matching lockets and enjoy frequent living-room dance parties, watching musicals in their pajamas and 1 a.m. trips to Wawa.

They also support each other. All three women lost their mothers at young ages. King has also gotten both girls into counseling, working and focused on school.

King knows she and her girls are lucky. She understands the often complex child welfare system and the resources in the city to help her daughters stay on the right track.

“When I hear other young people aging out of foster care, I think about Alexis trying to navigate financial aid without support and I think about Ruby… how would she know how to get car insurance or change a flat tire? I’m glad that these two have family but there are so many teens out there that don’t and as a system we have to do better.”

In May Ruby will graduate from CAPA and has applications in at seven schools, most of them local.

She’s excited about college but not sure if she wants to live on campus.

“I just moved in,” she said, nestling into King. “Why would I leave so soon?”